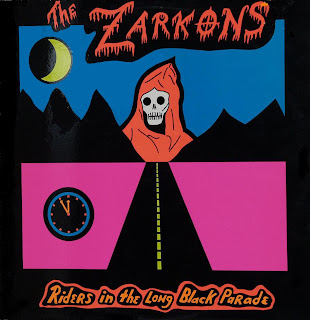 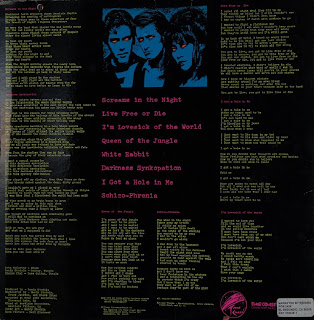 Formerly the Alleycats, this is their first LP under the moniker of The Zarkons. A fuzzy sound that is sometimes similar to X, they even cover White Rabbit from Jefferson Airplane. They released one more LP in 1988 after replacing drummer John McCarthy before disbanding.
Oddly, theis LP is titled Riders In The Long Black Parade on the cover yet the LP itself replaces Black with Dark. From Timecoast Communications and Marketed by Enigma Records.
Produced by Randy Stodola 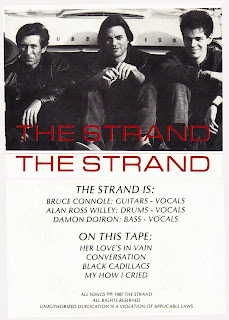 This 1987 Cassette from Arizona's The Strand, featured local legends Bruce Connole, Damon Doiron and Alan Ross Willey. Connolle and Doiron were also part of legendary Arizona bands featured here previously (Billy Clone & The Same and The Jetzons) as well as many others. This 4 song Power Pop cassette repeated on both sides. It took two source tapes to get a decent digital transfer, thanks to Brent for loaning the cassette to me to digitize.

Videos thanks to Joel Samuel

Interview with Bruce Connole of The Strand

Valley singer/songwriter moving to Nashville
Singer and songwriter Bruce Connole is leaving the Valley for Nashville, Tenn., where Oh Boy Records, the label representing Connole’s band, the Suicide Kings, is based. “I’m making the leap,” says Connole, who — save for a few years when he lived in L.A. in the ’80s — has been a permanent fixture on the Valley music scene since the mid-’70s; he has led such legendary Valley bands as Billy Clone and The Same, The Jetzons and The Strand. “After visiting out there and really getting a feel for the place, I pretty much fell in love with it. There are actually clubs that have live music that aren’t called Applebees and Fat Tuesdays.” Connole, who was once quoted as saying the only way he’d ever leave the Valley again is “in a pine box,” is a gifted country singer and songwriter, and the Valley’s loss will be Nashville’s gain. “It’ll either work out or it won’t,” says Connole. “Either way, I’ve got nothing to lose.”

A bit of a departure for me, but sometimes things fall into your lap and this is one of them. Worthy of a post nonetheless, an extremely rare video has surfaced on youtube, featuring The Ten O'Clock Scholars, which featured founding Gin Blossoms members and Arizona music legend Doug Hopkins as well as Bill Leen.

Ten O'Clock Scholars
Members:
Doug Hopkins (Guitar), Bill Leen (Bass), David McKay (Vocals), Randy Sanders (Drums), Jim Swafford (Guitar & Vocals)
Dates:
1986
Recordings:
Unavailable Demo
The Ten O'Clock Scholars, were the next band to be formed by Hopkins, who started out in Phoenix, for fun. This time with old Psalms members Bill Leen and Jim Swafford back in the fold. However, Hopkin's suddenly said he was going to LA for a recording contract, and simply left. After weeks of partying in LA, without doing what he set out to, Doug returned to Tempe, to find the Ten O'Clock Scholars gone, with David McKay and Randy Sanders having moved to Portland. Not being able to match the line up they had back home, or Doug's song writing ability, David called home, and it wasn't long before Jim, Bill and Doug had moved up to Portland to get the band rolling again.
The newly formed Ten O'Clock Scholars held onto the Hopkins' penned tunes Angels Tonight and Dream With You from Algebra Ranch. Both songs were performed on the TV show Night Zoo in which Doug did a short interview between the songs. A local pizza store owner also put up cash for the band to go into the studio and record both Angels Tonight and Dream With You, although the demo recording was never released.
The Ten O'Clock Scholars saw the basis of what was to become the Gin Blossoms grow further from Algebra Ranch. In addition to Angels Tonight and Dream With You, they performed the same covers that the early Gin Blossoms did, as well as Hopkin's originals "And" and "Blue Eyes Bleeding". ("Blue Eyes Bleeding" was later demoed by the Gin Blossoms). Apparently it was around this time that Doug began working on "Hey Jealousy", and "Found Out About You".
The band dissolved when Doug decided to move back to Tempe.