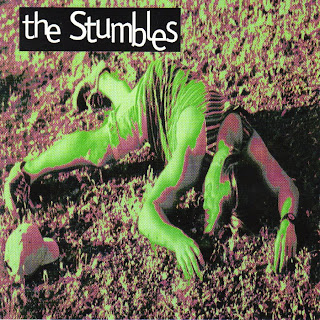 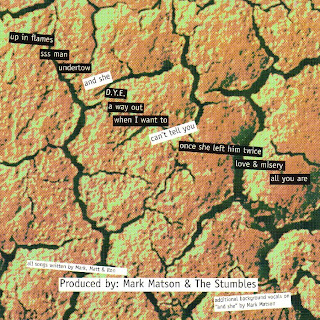 Previously featured here, Ron Walker's band after Middletown and a solo effort was poised to make it big. This 1995 debut release was sweet and pure guitar pop and quite possibly one of my all-time favorite CD's. Walker teamed with Mark Moffatt, trading vocals and both playing guitar. Matt Sadler played bass. Walker also took drumming credits on this disc. Produced by Mark Matson & the Stumbles at Salt Mine Studios.

After Jefferson Airplane, but before Styx, "eclectic" became a dirty word in rock. An "eclectic" young band is one that hasn't figured out what it wants to be when it grows up, while an "eclectic" older group means even the drummer thinks he can sing (and, worse, write). The Stumbles fall somewhere in between. The band boasts two strong front men/guitarists, Ron Walker and Mark Moffatt--and Walker plays all the drums on this CD.

Any group that runs as wide a spectrum of styles in a 40-minute live set as the Stumbles can is eclectic in the best sense of the word. This band can harness the power of Sugar or Live and tack on highly polished block harmonies worthy of the Plimsouls or the Rembrandts, as demonstrated here on "SSS Man" and "Undertow."

"And She" is a whisper-to-scream pop gem that starts out with chiming acoustic 12strings like The La's "There She Goes," before launching into a nasally Bob Mouldish chorus. When he sings this song live, the large-framed Moffatt resembles Ed Wood's beloved wrestler/actor, Tor Johnson, at his eye-bulging best. In the recorded version of "And She," Moffatt states that his beloved "gets on my face." Live, however, I could swear he sings "sits." In any case, "And She" is a killer song, and the band has more where that came from: The number of new tunes the Stumbles are currently playing out indicates the band didn't succumb to debut fever and shoot their wad on one album. Good thing. A recording this good deserves a quality follow-up. --Serene Dominic

Thanks for this post (among others).
This band was totally unknown to me and I enjoyed their 1995 self-titled record quite a bit.
Couldn't agree more with you on the sheer beauty of tracks like "And She".
The Bob Mould reference is quite appropriate as well.
Thanks again.
POPPHIL

Can you please redo that CD, Mr Mofatt was my High School teacher and I snuck into a few of their sets. I really thought they had potential but I lost the CD in a move.

I have re-posted both CD's, enjoy!!

For whatever reason I cannot download from Z share, just keeps dropping me to the start page. I will try again tomorrow at work, if that doesn't work I can always try to have a friend in Phoenix contact them and see if I can buy another CD.

Sorry, it seems to work ok, I just checked it here. If you still can't get it shoot me an e-mail with your e-mail address.

many of the downloads on the site need to be refreshed for they are unavailable to up-load! Can this be fixed?
Also have a few local jems on cassette and L.P. I would like to send to site for up-load...

many of the downloads on the site need to be refreshed for they are unavailable to up-load! Can this be fixed?
Also have a few local jems on cassette and L.P. I would like to send to site for up-load...

Just let me know which ones and I'll re-do them. I'd love to transfer anything you have for the site, shoot me an e-mail at azlocal @ gmail.com
PJ

The Stumbles seem to have stumbled in the trip from the old to the new download site.

the files are now available on the main page download section, enjoy!

Thank you. Awesome stuff. Any Beaumonts or Middletown?

Awesomesauce! Thank you very much.

You have a great blog here! VERY informative and well done!

I hope you don`t mind me saying this, but:

I HAVE THIS CD FOR SALE. You can view it at my blog: insanelyraremusic.blogspot.com

If anyone wants to buy this cd, send me (Ken) an offer to insanelyraremusic@gmail.com. I will make you a great deal!