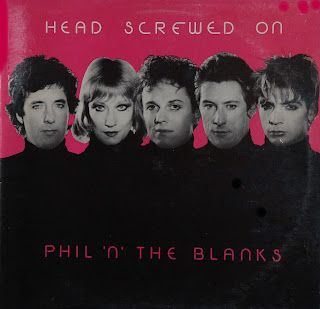 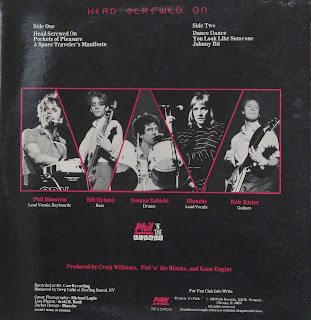 
Here is their third record, Head Screwed On, a 6 song ep produced by Craig Williams, Phil 'N' The Blanks and Kane Engler.

Vi-Sectomy (from the LP Choice) 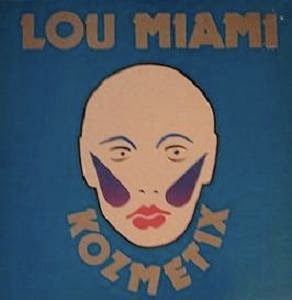 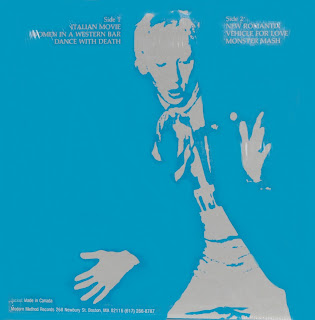 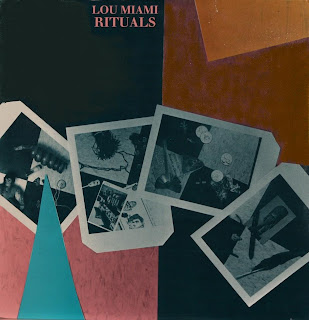 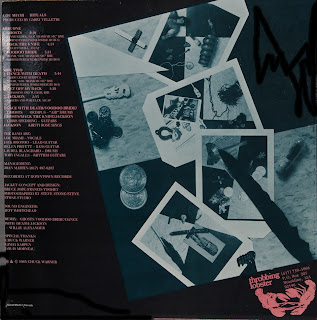 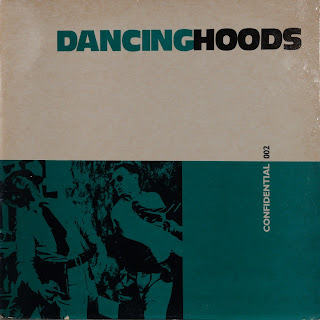 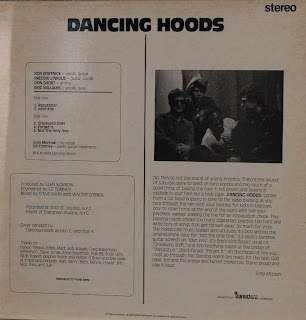 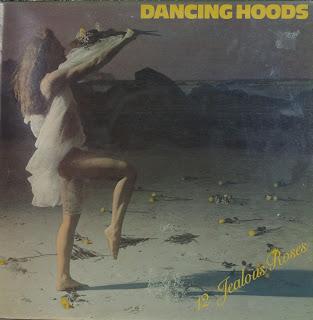 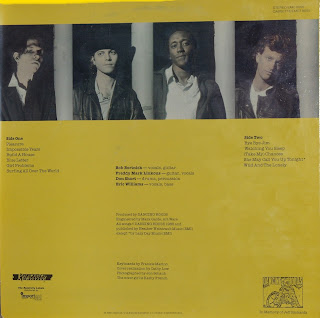 The killer 1984 debut ep from New York's Dancing Hoods as well as their follow-up LP 12 Jealous Roses released in 1985. Graveyard Shift is one of those cool, simple songs , that still stands up today. The following is the review from Allmusic, which mistakenly lists the bass player as Mike Garacino (he didn't join until their third and final recording, Hallelujah Anyway. Eric Williams handled bass duties on both of these recordings.


From Trouser Press:
Formed on Long Island, birthplace of the Stray Cats and Billy Joel, Dancing Hoods (following a self-released eponymous EP) debuted with familiar-sounding heartland rock on 12 Jealous Roses, a confident and likable collection of tuneful originals. Singer-guitarist (and future A&R executive) Bob Bortnick, guitarist-singer (and future Sparklehorse leader) (Freddy) Mark Linkous and bassist-singer Eric Williams (who actually has the most writing credits here) pen simple rockers about the usual topics and deliver them in a melodic cut-to-the-chase style that isn't all that dissimilar to, say, the Del-Lords. A flatfooted cover of the Left Banke's pure-pop harmony classic "She May Call You Up Tonight" only serves to demarcate the quartet's vocal limitations.
Leaving Williams behind (replaced by one Mike Garacino), the Hoods relocated to Los Angeles and took a shot at heavy rotation with Hallelujah Anyway, an unambitious mainstream rock record produced by a John Mellencamp associate, Greg Edward. Although the songs aren't nearly as fresh or memorable as those on the first LP (well, there is a Leonard Cohen cover), the arrangements (colored by guest keyboards and pedal steel) make better use of them. Enjoy the Hoods' rudimentary debut and leave this one to radio programmers in satin jackets.[Ira Robbins]

The Dancing Hoods featured one member, Mark Linkous, who found wider acclaim with Sparklehorse. Because of Sparklehorse, the Dancing Hoods were spared from vanishing into the abyss of forgotten alternative artists. Formed in New York by Linkous (guitars, vocals), Bob Bortnick (vocals, guitar), Don Short (drums), and Mike Garacino (bass), the Dancing Hoods recorded their first LP, 12 Jealous Roses, for Relativity Records in 1985. 12 Jealous Roses amassed a number of flattering reviews, and the band's no-frills rock & roll sound attracted fans of the Replacements and the Del Fuegos. In 1988, the Dancing Hoods released their second album, Hallelujah Anyway. "Baby's Got Rockets" was somewhat successful on college radio, and the video for the track was even added to MTV's 120 Minutes. The group then moved to Los Angeles to look for a major-label deal. However, they were unable to find one and the band split up afterward. Linkous returned to Virginia and joined the Johnson Family (eventually called Salt Chunk Mary). In 1995, Linkous started recording as Sparklehorse. Far more quirky and edgy than the Dancing Hoods, Sparklehorse released Vivadixiesubmarinetransmissionplot in 1995. "Someday I Will Treat You Good" was spun frequently on alternative radio stations, and Sparklehorse developed a cult following that renewed interest in the Dancing Hoods. ~ Michael Sutton, All Music Guide 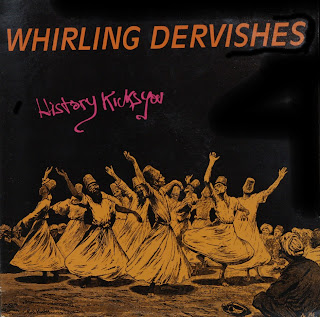 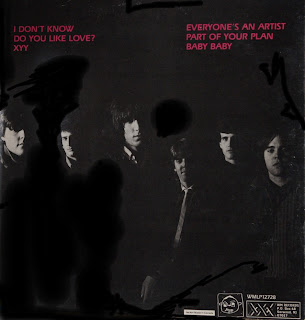 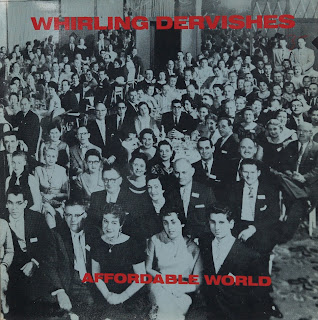 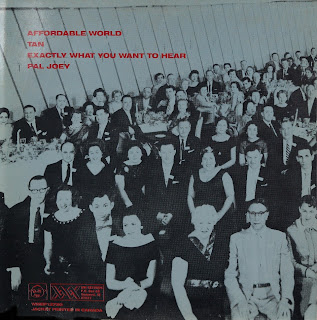 This Westfield New Jersey act lasted through the 90's, with their moody guitar based new wave rock. History Kicks You is a 6 song ep and 1986's Affordable World ep features the classic title track. They released a CD in 1992 (Strange & Wonderful), released the Grinch ep in 1995 and eventually morphed into Everlounge. Both ep's were released on WM Records.

Two Videos from their 1990's releases 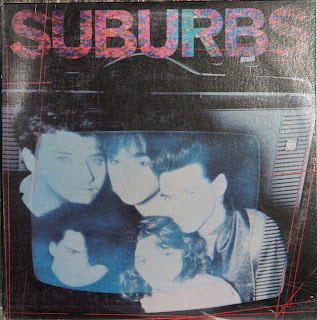 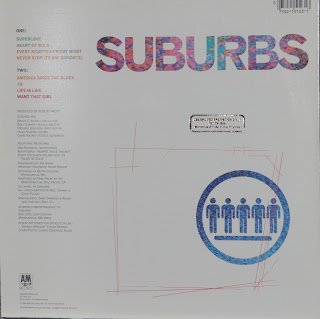 One of those records that makes no sense why it has never been released on CD, #9 was one of my favorite songs for some time when this came out, don't know why the label pushed Life Is Like (although not very hard if I recall).

From — Steve Huey, All Music Guide:
Minneapolis new wavers the Suburbs began recording for local label Twin/Tone in 1978 with a lineup comprised of vocalist Blaine John "Beej" Chaney, guitarist B.C. Allen, keyboardist Chan Poling, bassist Michael Halliday, and drummer Hugo Klaers. Their first full-length album, In Combo, was released in 1980, featuring tense, energetic playing and offbeat lyrics. The 1981 double album Credit in Heaven consolidated the band's approach, incorporating elements of funk, disco, jazz, and Roxy Music. The 12" single "Waiting" got the band substantial play in dance clubs and attracted the attention of Mercury, which signed them in 1983 and re-released their Dream Hog EP. Their major-label debut, Love Is the Law, was a harder-rocking effort which emphasized Chaney and Poling's novel lyrics and featured a horn section. 1986 found the band on A&M working with producer Robert Brent, who played drums in Prince's Revolution under the name Bobby Z; the resulting self-titled album strikes a balance between their traditional sound and, unsurprisingly, that of the Revolution. The band broke up in 1987; Twin/Tone released a best-of collection, Ladies and Gentlemen, the Suburbs Have Left the Building, in 1992. Poling contributed piano work to the Replacements' 1984 masterpiece Let It Be.