This month I plan on focusing on obscure punk groups from the 80's. Hope you enjoy it!
4 comments: 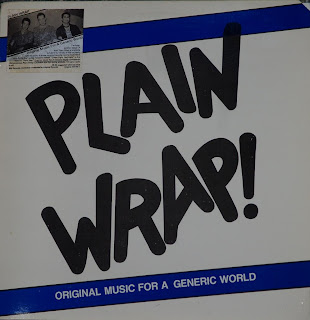 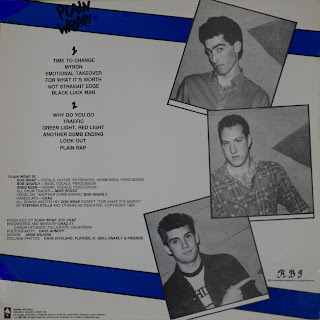 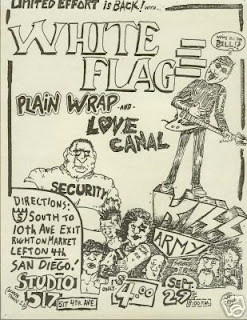 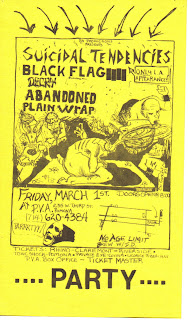 Released in 1985 on Enigma Records, these Huntington Beach, California punkers (which formed in 1983) released this LP, an "upbeat, poppish mix of punk, metal and funk". They also appeared on several Flipside Comps and a 7" single or two if I recall.
The standouts here include "Myron", their cover of "For What It's Worth", the metallized punk of "Black Luck Man" and the Red Hot Chili Peppers feel of "Plain Wrap".

All Songs written by Don Wrap (except For What It's Worth)
Produced by Plain Wrap and Chaz
Recorded at Casbah Studios - Fullerton, CA 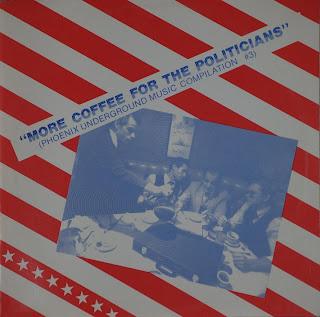 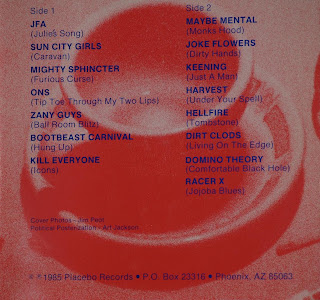 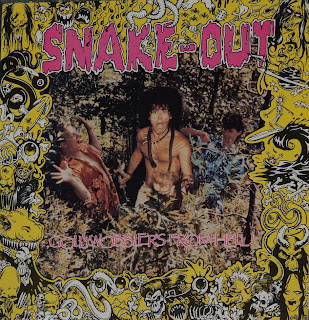 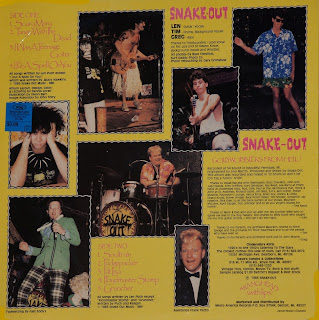 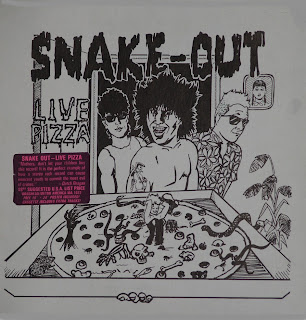 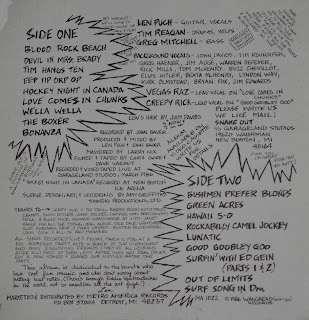 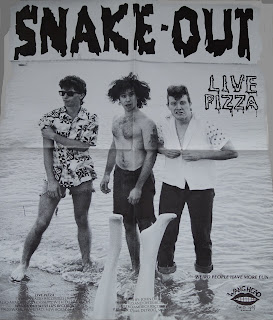 2 LP's from these wacked out, zany, punk surfabilly rockers that are both loaded with politically incorrect lyrics, awesome tunes and fun! Live Pizza even came in a miniature pizza box in lieu of an album jacket. It was recorded live (obviously) and they also offered a Video Cassette of the show. If I'd only ordered one! Both records are on Wanghead (with Lips) Records. 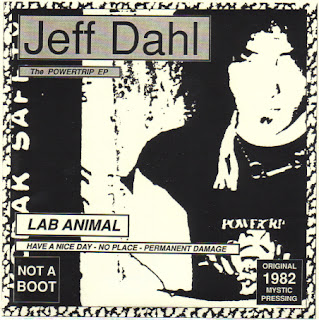 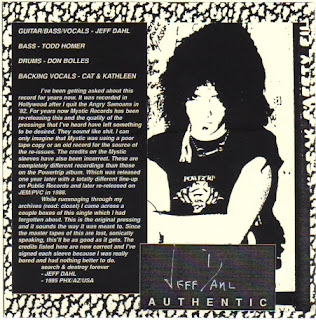 This 7" from legendary Punk Rocker Jeff Dahl is a real treat. I got it directly from Jeff a few months back when I met him at a record show and you won't find too many people as nice as him. With just an unbelievable number of releases in his prolific career, this is an especially cool 7".
As he explains on the back cover - It was recorded after I quit The Angry Samoans in 1982. For years now, Mystic Records has been releasing this and the quality of the pressings I've heard have left something to be desired. I can only imagine that Mystic was using a poor tape copy or an old record for the source of the reissues. These are completely different recordings than those on the Powertrip album. While rummaging through my archives (read: closet) I came across a couple boxes of this single which I had forgotten about. This is the original pressing and it sounds the way it was meant to.


Jeff has also been in a number of bands in addition to Angry Samoans, Vox Pop and DC 3 to name a few. 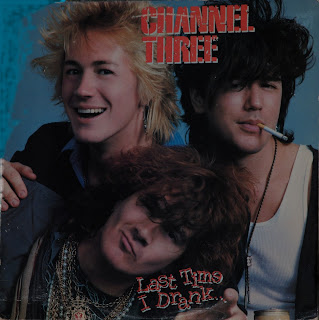 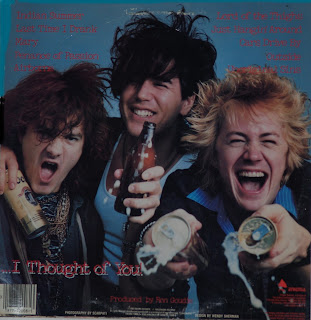 Enigma Records released this LP, an attempt by the group to gain a wider audience.
It's probably my favorite record of theirs. These guys are still together making great music!
From the Channel 3 website www.chthree.com CH3 then delivered Last Time I Drank in 1985, a record that many hardcore punk fans found not only a shocking display of musicianship, but also a blatant display of disrespect of all things bald, broke, and smelling of clove cigarettes. This one even had a saxophone on it for God's sake! Never fond of the strict conformity of Punk Rock's non-conformist manifesto, the band continued to explore musically.


From Trouser Press (Ira Robbins): The even-better Last Time I Drank finds the Magrann/Lansford writing/singing partnership firing on all rockets. Putting a mature post-punk sensibility to melodic hard-rock with an occasional Southwestern twist, CH3 comes through with an exciting record that packs a punch yet keeps both feet on the ground. Making memorable music this energetic without collapsing into raucousness or resorting to metallic precision isn't easy, but every song on the album finds a way to do it. Perhaps the Aerosmith cover ("Lord of the Thighs") is a clue. Of all the early punk bands, CH3 is one of the few that outgrew the genre without sacrificing its credibility.
[Ira Robbins]

The Band:
Michael Magrann, Jay Lansford and Dusty Watson(Stepmothers, Agent Orange, Concrete Blonde among many others)
Produced By Ron Goudie 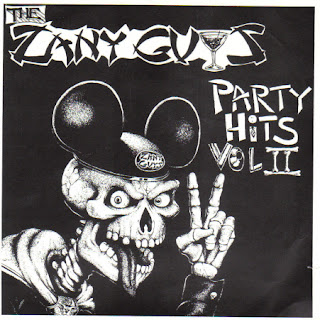 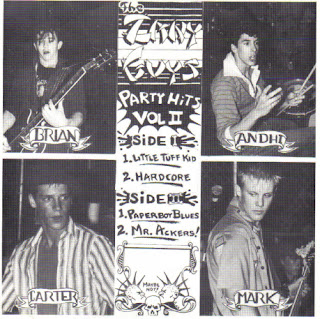 Phoenix punkers The Zany Guys released this 4 song 7" in 1983 on Placebo Records.
They also had a few songs on the compilation record "This Is Phoenix, Not The Circle Jerks". Part of The Mad Gardens scene along with J.F.A., The Sun City Girls, Meat Puppets, Junior Achievement, Nova Boys, Hellfire and Conflict among others. 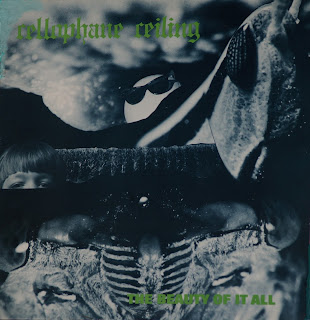 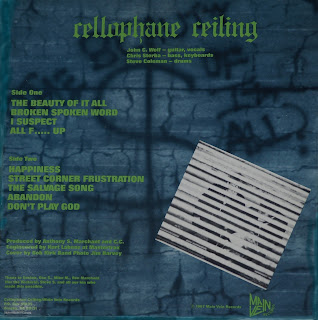 Released at the end of 1986 on the band's own label, Main Vein Records, The Beauty Of It All by Cellophane Ceiling, sometimes referred to as the loudest band in Omaha, Nebraska, is a classic. This young 3 piece (the members were 19,22 and 25) had been together almost a year by the time they recorded this. They opened for Husker Du, The Replacements, Dead Milkmen and Soul Asylum. This is their 2nd release, their first being a four song cassette. This LP was produced by Anthony Marchant.

From the World Herald Newspaper by James Healy (January 11th, 1987):
Omaha's Cellophane Ceiling raises the roof with "The Beauty Of It All," a raucous, nine song album that is a triumph of garage-band intensity and studio precision.
Providing a change of pace in local music, the "thrashabilly" band pulls no punches on vinyl and never sounds self-concious.
What really pushes this album into the realm of excellence, however, is the trio's consistently gutsy, ever surprising musicianship. John C. Wolf's incisive guitar and vocals, Chris Sterba's punchy bass loops and Steve Coleman's wrecking-crew drums make for a remarkably tight weave.

Here's a handwritten letter that was inside my copy of the LP from John Wolf, the band leader, to a distributor. 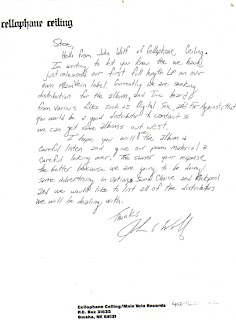 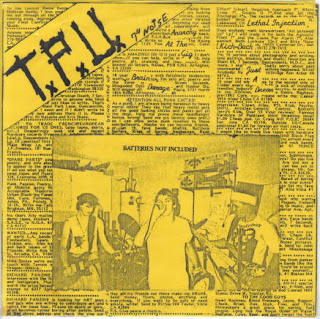 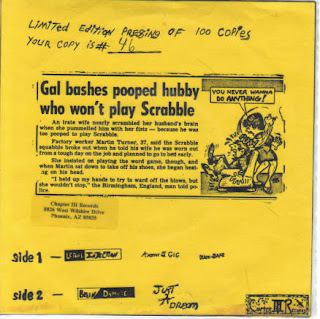 This 5 song 7" was on my turntable for a long, long time after I ordered it from an ad in MRR many years ago. Only 100 copies were made (mine is #46)and it was released on Chapter III Records in Phoenix, Arizona. The band was from Las Vegas I believe. Anarchy At The Gig is the highlight but all 5 cuts are true punk rock! They also released a 4 song demo cassette that has three additional songs. Unfortunately, no band information is listed on either release.

(EDIT - added a copy of the 4-song cassette as well)
Downloads all available on main page : http://azlocal.blogspot.com/