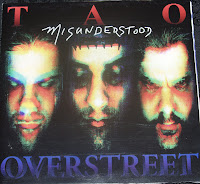 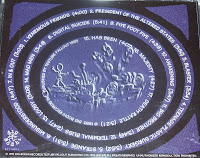 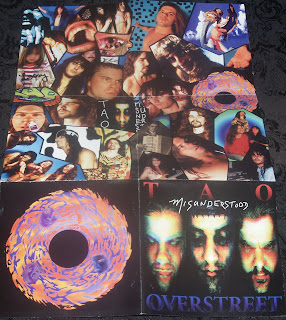 From Tempe, Arizona,  Tao Overstreet was wildly across the map in musical style. They later went on to become Idols Of Perversity. This is a CD rip.

From Peter Gilstrap and Serene Dominic's Tapes In the Mail from the August 1994 New Times:

Most local bands' idea of "dedication" is finding one group to emulate and then copy it up the wazoo. Tempe's Tao Overstreet chooses the less-traveled road by taking on several different styles--metal, rap, tribal punk--all at once. A&R people hate it when groups hop musical genres as often as Tao does on its Misunderstood CD, but the good news is that the band pulls off everything it sets out to do. Exceptionally well.
Each of the band's three singer-songwriters exhibits a healthy balance of wit and humour. The most hilarious moments belong to Page Davis, who makes insightful observations about "Teenage Plastic Surgery" (Her big nose bothers her like a disease/She wants nostrils like a Pekingese") and what it's like to be a "Has Been." Who can resist this tender tale of a washed-up, fortysomething musician who assures his 18-year-old trollop that he's several years younger than Keith, but many, many years younger than Mick?
Guitarist Bee Sanders' dead-on Perry Farrell impersonation is another real hoot, and "Strange" is as hooky as Jane's Addiction's best-loved material. But since the Farrell bit appears again several times more throughout the CD, the mimicry is less an homage than it is a hard habit to curb. That he's good enough to fool most listeners is still high praise, indeed. It might take you some time before you can understand Misunderstood, but it's certainly a fun jigsaw to figure out. Easily the most impressive self-produced CD (ditto for the packaging) that's come across the desk this year.


All downloads on main page: http://azlocal.blogspot.com/

Treks Himalaya an indoor trekking and outside excursions operative corporation takes you that similarly way to warranty you has a memorable outing that you have been dream is section of your choice. We have three days to 30 days your Nepal trekking to select however it relying of your timetable. We constantly appreciate our responsibility to continuously your Nepal holiday. Whether you are searching for a quiet gateway, a memorable time out with a household or an interesting nature. We provide you with the first-rate revolutionary records and itinerary main targeted and modified as per your requirements. It is widespread to memorize, though, it necessitate an ample stage of bodily homework and ought to remembers that there is additionally a psychosomatic assurance in taking walks in mountains. We strive to motivate Nepal to the exterior world whilst striving to shield an aged culture as properly as preserve the environment for technology to come. We specialize in organize Nepal travel activities excursion such as:- Trekking, Helicopter Tour, Peak Climbing, Mountain Flight, Honeymoon Tour, Sightseeing, Rafting, Jungle Safari, Pilgrim’s Tour, Hotel Reservation, Air Ticket, Tibet and Bhutan Tour many more your vacation desire. We dedicated ourselves to require every step essential to produce you and ability you'll dotingly recall upon not kind what it price you, as you will be revenant a we tend toalthier person choked with reminiscences. Trekking and tours company in Asian nation that's terribly believable, accountable and absolutely offers personage, group, tailored travel and trekking excursions in Nepal. If you'd wish to individual period of time information of trekking and visiting destination of various a part of Nepal likewise as tours to Asian country and destination Thibet and Bhutan during a secure and safe mode, then we is that the actual agency for you. Our trekking tours team involve information all side of country, the large historical sites, natural beauteousness and wildlife, most prominently, they offer you the chance to urge with native folks to envision their custom 1st hand exotic pleasant excitement of charming discovery trip with us in Nepal for your fully satisfaction trip. https://www.trekshimalaya.com